I am sincerely honored to present here a story, born in the imagination of a very talented author who saw my watercolor. I usually take classical literature, fairytales and fiction, for my illustrations, but I must say, it is a marvelous feeling to have an original piece in harmony with my drawing.

Please enjoy @isa93’s story and I hope we will soon read something new from her! 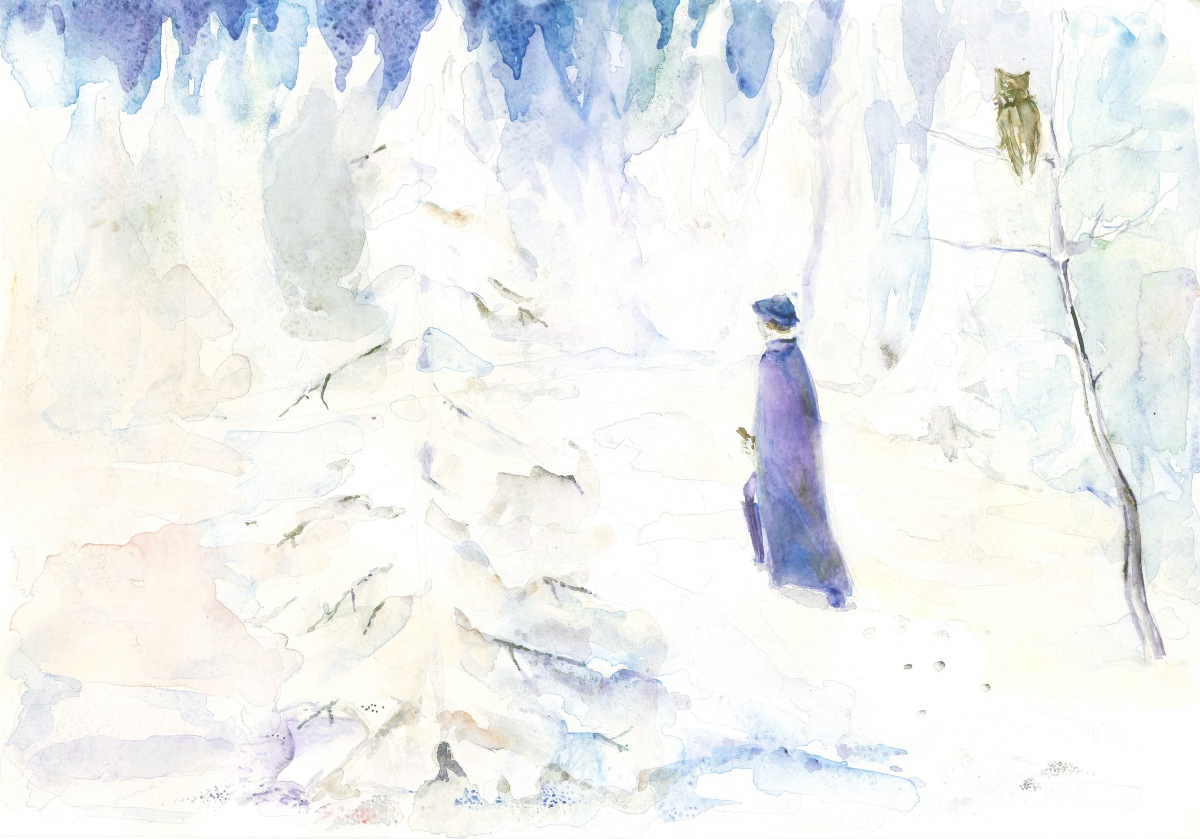 He woke up surrounded by blue. The light that shone inside the snowy cave, the robe that had kept him warm during the gelid night. Even his eyes, reflected on the blue ceiling made of ice.

The prince stretched his limbs, breaking the cold from his muscles. On his elbows, he crawled out of the low cave. He closed his eyes before emerging and then just stood there, two feets from the entrance. The freezing cold air slowly surrounded him while he prepared to open his eyes, not yet ready to face the blazing light. It wasn’t until he had put on his blue hat that he was able to take in the landscape before him. Soft blanket—pure white.

He searched for his friend in the low branches of the trees, even though he hadn’t heard its characteristic greet. It wouldn’t be there. Not this early. Feeling just slightly lonely, he resumed his journey—blue boots easily cutting through the mellow snow.

With the sun high in the sky his lively pace turned to a slower one, melting snow making it harder to advance. In the new rhythm, he thought about his mission. Would he ever find him? He was tired, but he couldn’t back down now. He had to find Raskith.

Thinking about the warlord sent a chill down his spine. Had it been wise? Taking that quest on his own? Would he be attacked? He hoped he didn’t need to use his sword. He disliked violence.

The prince almost laughed at that last thought. He had made the journey all the way from Alge-Cale to wander the depths of those woods in search of a powerful weapon that would give his kingdom a tactical advantage over their neighbours. But he disliked violence. Even with his diplomatic upbringing, he couldn’t escape it. Why was violence so easily sparked whereas peace was so elusive? Peace was anything but the absence of violence. Would it be like that forever? To fight while at war and prepare to fight while at peace. Was there an end to the cycle?

He raised the collar of his robe against his face, protecting it from the chilly wind. An almost unnoticeable rustle in the top of the trees made him smile a little. “Who? Who?” his feathered friend asked, soaring low in the late afternoon, once again keeping him company in those desolated woods. Who, indeed, could find a balance between the two powers?

The mute shadow of the owl sliding over the snow was replaced with one much bigger. Looking up, the prince marveled at the scene before him. Black silhouette covering the red twilight sky.

“Who roams these woods?” Raskith asked as he landed, the whole ground shaking from his words. The calm, golden eyes, three heads above him, radiated authority. So much that the prince felt compelled to answer immediately.

“Kalrich, Prince of Hyroc, My Lord.” He said while bowing. The prince was mesmerized by the black scales that covered the giant body from tail to wings. He focused for a moment where his talons met the snow. A perfect match. An enchanting contrast.

“What business does your kind has with the Northern Dragons, Your Highness?”

“I seek an audience with My Lord… Our kingdom calls for aid.”

For a long moment, there was no answer. It gave the sun enough time to hide completely behind the mountains, turning deep red into dark blue.

“Very well.” Raskith said at last. “Kalrich, Prince of Hyroc. You are welcome to share your concerns with the dragon council.”

Strong, yet serene. Rampaging, yet composed. Violent, yet peaceful. Following the warlord to the Northern Dragon’s den, he was surely on the right path to finding an answer.

His search was over, but the journey had just began.